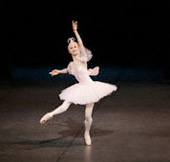 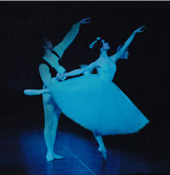 【Stage Experience】
After graduating from the the Royal Ballet School, joined the English National Ballet as the first Japanese dancer. Danced for Diana, Princess of Wales at the Royal Albert Hall, and also danced hundreds of times at major theatres in Europe including the Royal Festival Hall, the London Coliseum, the Birmingham Hippodrome, and the Theatre of Dionyson at the foot of the Athenian Acropolis. Danced as the soloist at the Nagano Olympics opening ceremony and with the New National Theatre Ballet Tokyo. Afterwards, joined the K Ballet Company and toured across Japan with Tetsuya Kumakawa, a renowned principal dancer and director, and Miyako Yoshida, a guest principal dancer at the Royal Ballet.

【Teaching Experience】
The third Japanese person to be awarded the Enrico Cecchetti Final Diploma qualification. http://cicb.org/diplomas/
Holds a Licentiate qualification (Cecchetti) from the Imperial Society of Teachers of Dancing, Great Britain.
Taught for the Elmhurst Ballet School (associated with the Birmingham Royal Ballet), the Legat School, and the Matthew Bourne's New Adventures, Great Britain.
Served as a Jury at the Asian Ballet Competition in Hong Kong and other competitions mainly in Japan. Actively assist students who wish to study ballet abroad, and serve as a tutor at the auditions in Japan for the Elmhurst Ballet School and the Royal Conservatory of Scotland. Served as an interpreter of Ms. Diane van Schoor (former Principal of The Royal Ballet School, Lower School) for the Enrico Cecchetti Diploma Course held in Tokyo.
Has been invited as a tutor at the Asian Grand Prix Competition (AGP) and the AGP Ballet Intensive Program (BIP) in Hong Kong, and many other places.

【Translation】
Translated and proofed the text of the Enrico Cecchetti DVD/Blu-ray and printed material into Japanese, a heritage, educational project to record the Cecchetti's legacy for further generations.
International version：Opus Arte at The Royal Opera House
https://shop.roh.org.uk/products/the-enrico-cecchetti-diploma-dvd-bluray
Japanese version：Shinshokan（Booklet is also available in Japanese）
https://www.fairynet.co.jp/SHOP/4560219325449.html

【Biography】
Graduated from Canada National Ballet Teachers Training Programme. Worked as assistant and substitute teacher for the Canada National Ballet School in Toronto, Canada.
Wendy has formative skills in teaching Contemporary, Jazz, Modern, and Body Conditioning, as well as National and Classical Ballet. She has been teaching internationally in Spanish and English to support children who aspire to go into the professional dance world. She has abundant teaching experience in Japan, and joined our school as a teacher from Autumn 2013

【Biography】
One of the very few Cecchetti ballet teachers in Japan who has a Licentiate (higher teaching qualification) of the Cecchetti Method.
She graduated from the Teacher Training Program at the Edmonton School of Ballet (ESB), in Edmonton, AB, Canada and worked as a qualified ballet teacher for the ESB and obtained extensive teaching experience there.
After she returned to Japan, she joined the Ballet Garden as a full-time teacher and conducts bilingual classes in Japanese and English.
Before she began her training at the ESB in Canada, she graduated from Lakeland College in Wisconsin, USA and studied at the University of Nevada, Las Vegas, USA, where she obtained a Pilates Teacher Certification.

【Biography】
Kaede Maruyama learned the Cecchetti Method extensively under Miho Tsurutani, Wendy Jiménez and Yukie Muraoka for 5 years at The Ballet Garden. During this time, she worked as an assistant before starting her career as a teacher.
She passed three levels of vocational graded examinations up to Advanced 2, and Associate (teaching examination), all with distinctions, and is now registered with the ISTD as a qualified ballet teacher.
She has also been learning enthusiastically from European mentors at the Cecchetti Summer School in the U.K., and is ready to apply her new skills here at our school.

【Biography】
Ria Shiraishi practiced the Cecchetti Method, music, anatomy and psychology under the direction of Miho Tsurutani for the last 3 years at The Ballet Garden.
During this time, she worked at our school as an assistant before starting her new career as a teacher.
She has successfully completed two levels of ISTD examinations in Japan with distinctions, and she attended the ISTD Cecchetti Summer School.
She has been preparing for the Spring 2020 ISTD Teacher's Qualification Exam which has been postponed due to the current pandemic.